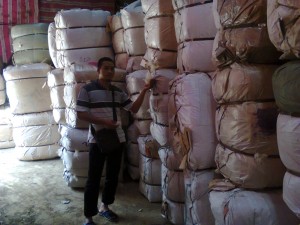 The fibre is light, very buoyant, resilient and resistant to water. The process of harvesting and separating the fibre is labour-intensive and manual. It is difficult to spin but is used as an alternative to down as filling in mattresses, pillows, upholstery, stuffed toys such as teddy bears, zafus and for insulation. It was previously much used in life jackets and similar devices. Until recently synthetic materials largely replaced the fibre. The seeds produce an oil used locally in soap and that can be used as fertilizer.

Native tribes along the Amazon River and in the tropical rainforests there harvest the kapok fibre to wrap around their blowgun darts. The fibres create a seal that allows the pressure to force the dart through the tube.

The commercial tree is most heavily cultivated in the rainforests of Asia, notably in Java (hence its nicknames), Philippines, and Malaysia, but also in South America.

The flowers are an important source of nectar and pollen for honeybees.