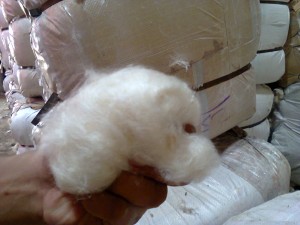 Kapok ( Ceiba pertandra Gaertn of family Bombacaceae ) or kapok ( Sunda / Java ) and kapo ( Madura ) is commonly grown in the coastal areas and lands with a height of 700 meters above sea level ( asl ) . These species begin flowering and fruiting at the age of 5-6 years with the harvest is done after the seeds are yellow -gray cotton . Plantation crops is different from that produced cotton from the cotton plant is used for textile raw materials or other clothing . Traditionally , cotton is used as a filler material or mattress maker and currently developed various types of other purposes .

Of the 147 types of cotton that can be grown in many countries , there are two types that can produce products that are good enough that indica and caribbaca . Indica has a short stem and leafy rare and can produce about 600 logs ( about 20 kg of fiber / tree / year ) , whereas the type caribbaca have a higher trunk , large , leafy and produces about 2000 logs ( about 80 kg of fiber / tree / years ) .

Probably not many know that Indonesia has become the largest producer of cotton ( about 80 percent ) before World War I. Approximately 60 percent of the current production , comes from the island of Java , or kapok known aliases \ ” java kapok \ ” .

A number of data mentioned in cotton exports 1936-1937 Indonesia reached 28.4 million kg / year . Along with the lack of an increase in value -added cotton lead cultivation continues to decline . There was no means of support and the lack of adequate technology and capital increasingly driven down the kapok . As a result, the quality and cotton production also fell . In the early 1990s , the data is no mention of cotton plantation area of ​​about 600 thousand ha , this number continues to decline .

One more step to lift the cotton would benefit by offering value -added processed products or profitable . At least through the efforts of producing cotton smooth , clean cotton , recycled cotton , and a number of other types , is expected to boost the cultivation . Benefits are also no longer limited to cotton material for mattresses and pillows , but also clothes , especially aircraft pilots tool in order to avoid accidental self-rescue aircraft .

Cotton seeds can be processed into a type of cooking oil and oil mixture Nonkolesterol as raw material for making soap . Even used as fuel in the lamp light . Kapok cake can be used as an ingredient in fertilizers , and from the seeds can also be processed for other animal feed ingredient .

The potential development of refined products in the country is still quite large , though economically should be examined further . This is important because the use of cotton not only in Indonesia but it spread into the world community needs .

Although many synthetic products , public interest against the cottonwood is still quite large . Of which can be seen from the Indonesian cotton exports to Asian countries , the Middle East and Europe / United States ( U.S. ) . Unfortunately , due to the production of young Indonesian cotton exports also led to very limited with an average value of about U.S. $ 1 million per year . During 2002 reached U.S. $ 1.3 million .