Ceiba pentandra Telugu: is a tropical tree of the order Malvales and the family Malvaceae (previously separated in the family Bombacaceae), native to Mexico, Central America and the Caribbean, northern South America, and (as the variety C. pentandra var. guineensis) to tropical west Africa. Kapok is the most 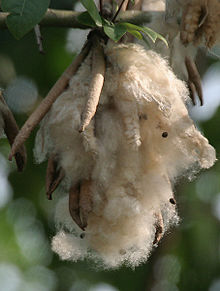 used common name for the tree and may also refer to the cotton obtained from its seed pods. The tree is also known as the Java cotton, Java kapok, silk-cotton or ceiba.

The tree grows to 60–70 m (200–230 ft) tall and has a very substantial trunk up to 3 m (10 ft) in diameter with buttresses. The trunk and many of the larger branches are often (but not always) crowded with very large, robust simple thorns. The leaves are compound of 5 to 9 leaflets, each up to 20 cm (8 in) and palm like. Adult trees produce several hundred 15 cm (6 in) seed pods. The pods contain seeds surrounded by a fluffy, yellowish fibre that is a mix of lignin and cellulose. One of the oldest known trees is 200 years old, and sits at Terrazas in Miami.

The fibre is light, very buoyant, resilient, resistant to water but it is very flammable. The process of harvesting and separating the fibre is labour-intensive and manual. It is difficult to spin but is used as an alternative to down as filling in mattresses, pillows, upholstery, zafus, and stuffed toys such as teddy bears, and for insulation. It was previously much used in life jackets and similar devices until synthetic materials largely replaced the fibre. The seeds produce an oil used locally in soap and that can be used as fertilizer.

Native tribes along the Amazon River harvest the kapok fibre to wrap around their blowgun darts. The fibres create a seal that allows the pressure to force the dart through the tube.

The commercial tree is most heavily cultivated in the rainforests of Asia, notably in Java (hence its nicknames), Philippines, Malaysia, Hainan Island in China as well as in South America. The flowers are an important source of nectar and pollen for honeybees.

Kapok seed oil
A pressed seed oil can be derived from the seeds of the kapok tree. The oil has a yellow colour and a pleasant, mild odour and taste.[3] It has similar characteristics to cottonseed oil. It becomes rancid quickly when exposed to air. Kapok oil is produced in India, Indonesia and Malaysia. It has an iodine value of 85-100, which makes it a nondrying oil. This means that it does not dry out significantly when exposed to the air.[3] Kapok oil has some potential as a biofuel and in paint preparation.